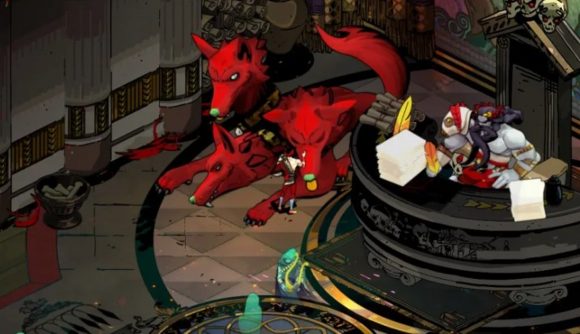 Did you know you can pet the dog in Hades? You can give Cerberus a lovely rub for being such a good, three-headed boy. We presume you might not have known, because according to Steam stats, very few players are doing it regularly.

The revelation comes from the Can You Pet The Dog? Twitter account. From statistics on Steam achievements, 12.1% of players have earned the trophy for petting Cerberus ten times, and frankly, we have questions. Is it because he’s so large that some of you are intimidated? Are you just too consumed on obtaining victory in the action-adventure game that you don’t think of giving him a wee pat? He might be guarding the Temple of Styx, but earlier he’s always there in the House, quietly cheering you on, y’know.

Hades came out of Early Access after nearly two years earlier this month. We gave it a strong review, to say the least, Diego Arguello writing that the RPG game is “perhaps the first roguelike I’d recommend to everyone, regardless of their experience in the genre”. It’s the latest hit indie game from developer Supergiant Games, who also made Bastion, Transistor, and Pyre.

As the tweet points out, affection towards your animal comrades is important. Mortal Shell developer Cold Symmetry reported that, during the beta, less than half the players pet the cat. Dogs and cats see the best in us, even when we so often fail to see it ourselves. The least we can do is give them a bit of a scratch and let them know they’re noticed and appreciated.

According to the Steam achievements, only 12.1% of Hades players have pet Cerberus ten times or more. Please remember to show your animals the attention and affection they deserve. pic.twitter.com/oFQxPPhC7X

If you’d like to hop into Hades and boost these rookie numbers, you can find it on Steam here.